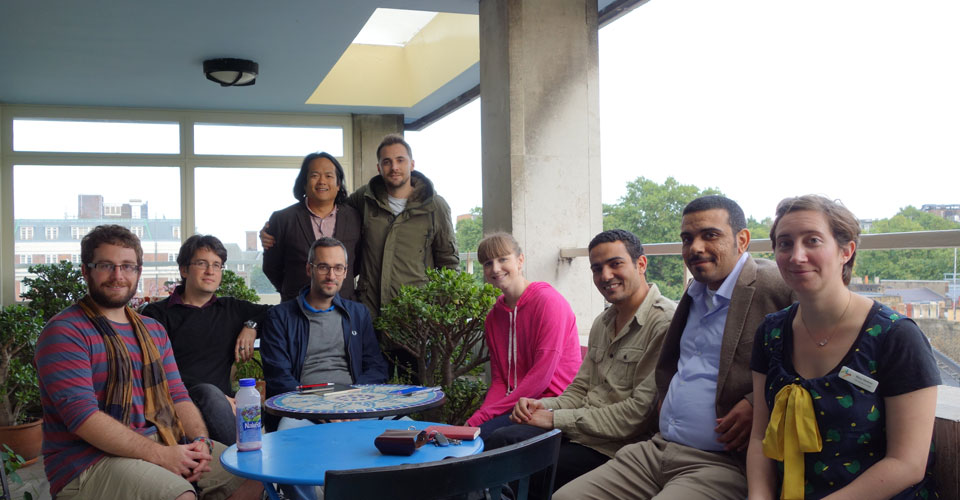 Justin Yoo has a BA in Anthropology, an MA in Egyptian Archaeology from University College London, and is currently a PhD student at King’s College London writing a thesis on Greco-Egyptian economy, trade and identity formation from the 7th to 4th-century BC.   He has also studied at Oberlin Conservatory/College, Royal Central School of Speech & Drama, University of Hawaii at Manoa, Queens College (CUNY), UCLA, and the  Middlebury Language Schools (French & Arabic). He has excavated at Mendes, Tell Timai, Khirbet al-mafjar, and also has worked for the British Institute in Amman as editorial assistant for the CBRL Bulletin and the CBRL website. His research interests are in Egyptian economy from the New Kingdom through the Ptolemaic Period.

Massimiliano Pinarello has a BA in Classics from Università Cattolica del Sacro Cuore di Milano, an MA in Egyptian Archaeology from UCL and is currently finishing up his PhD thesis at UCL’s IoA–which looks at the actual ancient Egyptian writing practices obliterated by the reified status of ‘scribe’ and its Egyptological construction as a social category; it aims to deconstruct the category, and to suggest a new perspective that considers historiography, museum displays, and the way that certain objects have been used to fetishize the ‘scribe’ as a distinct class of people in ancient Egyptian society.

Courtney Bobik is the CRE XV webmaster and is attending University College London, Institute of Archaeology working towards an MA in Egyptian Archaeology. Courtney has traveled to Egypt twice as a student participating in the Tell Timai Field School, offered through the University of Hawaii. Courtney’s primary areas of interest are: Hellenistic Egypt, Roman Egypt, and the analysis of human remains.  Courtney has a BA in Classics from Mt St Mary’s University.

Stacy Hackner is a PhD student at UCL’s Institute of Archaeology, focusing on bioarchaeology and biomechanics and using the collections of the British Museum. She is looking at the change in the shape of bones, particularly the tibia, over the course of Nubian prehistory. The tibia has been shown to be particularly receptive to changes in activity beginning at puberty; by comparing these bones to modern studies of athletes and biomechanical models, she hopes to understand the shift in food procurement from hunting and gathering to agriculture and pastoralism or other methods of subsistence. She will be using new techniques involving 3D scanning, which is an inexpensive way to emulate CT scans or direct sectioning of bones. In her rapidly vanishing free time, she enjoys crafts such as sewing, knitting, and baking pies.

Yukiko Kawamoto has a BA and MA in History from Sophia University in Japan. She was an ERASMUS PhD student in Klassische Archaeologie at Ludwig Maximilian University in Munich and is a PhD candidate in Engineering at The University of Tokyo in Japan and concurrently, a PhD candidate in Classics at King’s College London. Her main research area is Roman architectural history and those structures described in texts. She is also interested in the sociopolitical history of the late Roman Republic to the early Imperial period.

Jason Lundock completed his undergraduate training at Harvard University and his Master’s degree at King’s College London, where he is currently completing his doctoral research and thesis into copper alloy dining vessels from Roman Britain.  He has undertaken work with The Palestine Exploration Fund, the Portable Antiquities Scheme, and the British Museum. He successfully chaired and hosted TRAC 2013 at KCL.

Hany Rashwan is a PhD student at School of Oriental and African Studies, university of London, under the Centre for Cultural, Literary and Postcolonial Studies. His main research area is comparative/Historical Rhetoric. His study tries to offer a new rhetorical criticism to the ancient Egyptian literary devices based on Arabic-Semitic rhetoric methodology.  His study entails a systematic critical revisionism of the predominantly Eurocentric approaches in the disciplines of Egyptology and comparative literary studies. His research interests include rhetoric theory, the history of rhetoric, intercultural communication, linguistic anthropology, and comparative linguistics. He has a BA in Egyptology and MA in the Ancient Egyptian Language from Helwan University at Cairo.

Federico Ugolini has a BA and an MA in Archaeology from Bologna University. He is currently a PhD student at KCL, conducting an investigation on the Roman harbours along the Northern and Central Adriatic Sea, focusing on aspects of archaeological data, antiquarian tradition, economy, trade and geomorphology of the port during the Imperial period, from the 1st to the 5th century AD. He has excavated at Rome, Ravenna, Osimo, Aquileia, Rimini and Marzabotto. More recently, he was involved in the Portus Project (British School of Rome), the excavation of the ancient port of Rome. He also published articles on his works (Rome and Nicosia) and recently presented several papers on the Roman port of Ariminum (Virginia, London, Nicosia).

Carl Walsh has a an MA in Egyptology from the University of Cambridge and and an MA in the Archaeology of the Eastern Mediterranean and Middle East from University College London. Carl is currently at UCL working on his PhD project titled Techniques of the body and the transmission of courtly lifestyles in the Bronze Age Eastern Mediterranean. Carl also works as a postgraduate teaching assistant at UCL and has participated in field work at Sesibi, Sudan and at Knossos, Crete. His research interests include Bronze Age diplomacy, elite body culture and the archaeology of the Kerma Culture in northern Sudan.