The city of Alcalá de Henares

The city of Alcalá de Henares is 30 km away from Madrid, the capital of Spain. Alcalá is a city of astonishing beauty, recognized as a World Heritage Centre, largely because of the historical and architectural significance of its University. The origins of the University of Alcalá go back to Medieval times, although it was during the first years of the Sixteenth Century when the city took its place as a mayor centre of Humanism, during the Renaissance. Part of this glorious past is nowadays reflected in the monumentality of its main buildings. The most important of them is the Mayor College of San Ildefonso, which nowadays is the central building of the University Govern. It is in this impressive building where we will be hosting our CRE conference. 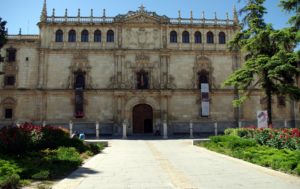 Alcalá is one of the most important touristic sites in the Community of Madrid. Engaging locations such as the house of Miguel de Cervantes, the famous author of Don Quijote de la Mancha, the well preserved Roman archaeological site of Complutum, the cathedral of Alcalá, the Episcopal palace, and the city walls are just a few examples of charming places that one can visit within the city.

If you would like to know more about such a lovely city, we suggest you to visit:

Regarding the visa entry for non-European participants, you may need to ask for a visa document in the Spanish Embassy or Consulate in your country. The University will be happy to provide you with an invitation letter if needed. If this is your case, you will find all the necessary information in the following link:

How to get to Alcalá 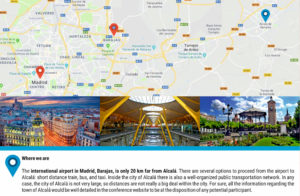 If you are traveling by plane, the best option is to flight to Adolfo Súarez Madrid-Barajas International Airport, which is only 20 km away from the city of Alcalá. There are several options to proceed from the airport to Alcalá:

The bus is the cheapest and easiest option to get from the airport to Alcalá. The price of the one-way ticket is 3,60 €. The ride lasts around 40 minutes from the airport to downtown Alcalá. Information about schedule and routes is available here: http://www.alcalanow.com/bus-airport-alcala/

Be aware that you will have to deposit by yourself your own luggage in the lower compartment of the bus. Then you can get on the bus and pay your ticket directly to the driver. If you are traveling by yourself, do not pay with bills higher than 5 €, since drivers do not usually carry any change and may not have cash for your change.

There is no direct connection between the airport and Alcalá. This means that you will need to travel by train first to Madrid and then transfer to the line running to Alcalá de Henares.

The train station is located at terminal T4. If you are landing in terminals T1, T2 or T3, then you will need to take the transfer airport free bus to terminal T4.

Since there is no subway network connecting with Alcalá, taking the subway in the airport is not a good option. If you take the subway, then you will need to go to Madrid, and after several changes you will arrive to Atocha train station, where you will be able to take a train from line C-7 or C-2. We recommend not to take the subway.

Taking a taxi is, of course, the most comfortable and easiest way, but it is also the most expensive option. A taxi will cost you around 40-50€, and could be considered the best and easiest option if you were traveling with a group of 3-4 persons.

If you are flying to any other Spanish airport than Barajas Airport or you choose to travel by train or bus to Madrid, then you will need to get to the train station of Atocha in Madrid, where you will be able to take a short distance train (lines C-7 and C-2) or a bus to Alcalá.

In case you would like to take the train, please see the instructions above.

If you prefer to take the bus, several bus-lines cover the distance between Madrid and Alcalá de Henares. Besides the aforementioned Bus 824, which stops at the airport, four other buses can take you to Alcalá. Buses 223, 227, and 229 operate during daytime, while Bus N202 works during night-time. All of them depart from the “Avenida de América” bus station and reach the city of Alcalá.

You can check schedules and routes in the following website: http://www.ayto-alcaladehenares.es/portalAlcala/contenedor1.jsp?seccion=s_fdes_d4_v1.jsp&codbusqueda=454&language=es&codResi=1&codMenuPN=2&codMenuSN=195&codMenuTN=380&codMenu=480&layout=contenedor1.jsp

If you prefer to take a taxi, see instructions above. The taxi fare to Alcalá will be similar whether you take the bus from the airport or from Madrid itself.

At this point we are pursuing the possibility to ensure special prices with several hotels at Alcalá and with our UAH Accommodation Services in order to offer some discounts to the CRE participants. We will provide more information about these options in the Call for Registration.