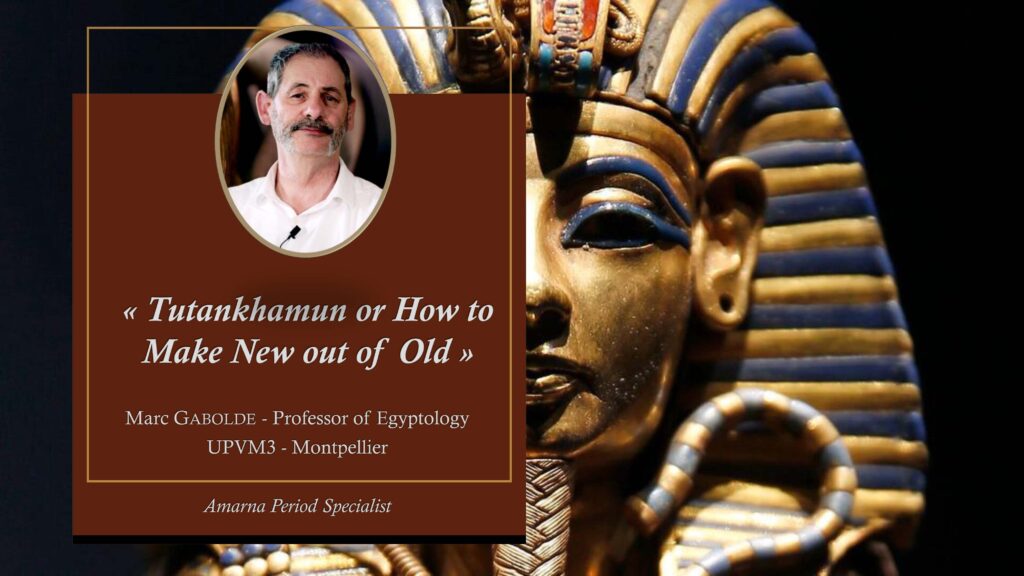 « Tutankhamun or How to Make New out of Old »

Dr. Prof. Marc Gabolde held the chair of Egyptology at Paul-Valéry Montpellier 3 University, specialized in the Eighteenth Dynasty. He is a world-renowned scholar for his numerous publications on the Amarna period. He is currently a senior researcher assigned to the CNRS (2020-2022) in Luxor, at the Centre Franco-Égyptien d’Étude des Temples de Karnak (CFEETK), where he studies the blocks spread within the temple enclosure and belonging to the memorial constructed by Aÿ for Tutankhamun. Further informations at: http://www.montpellier-egyptologie.fr/equipe/marc-gabolde/ 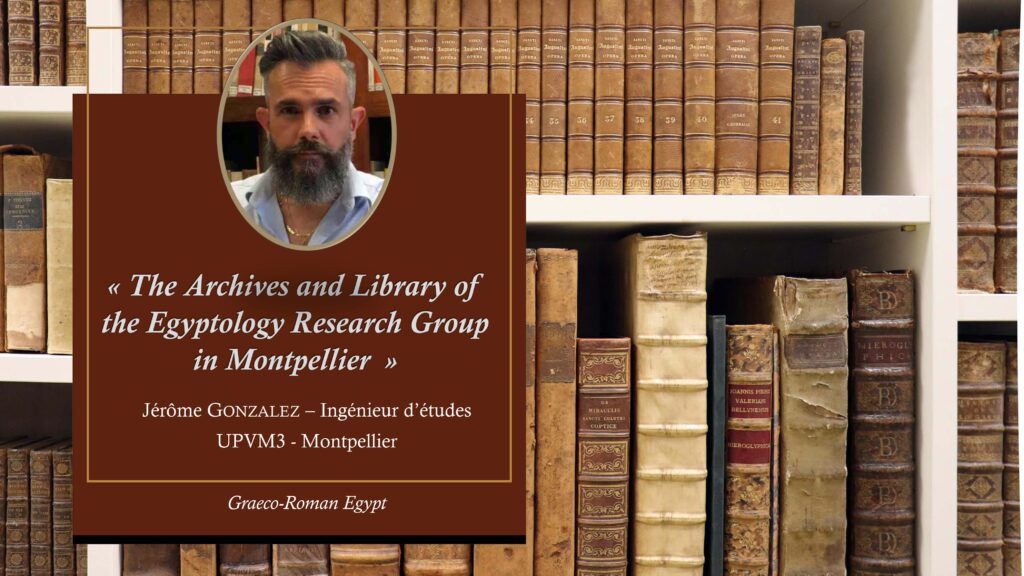 « The Archives and Library of the Egyptology Research Group in Montpellier »

Mr. Jérôme Gonzalez is Ingénieur d’études (i.e. “Research Associates”) at Paul-Valéry Montpellier 3 University, specialized in Late Period as well as Greek and Roman Periods. Since 2013, he is in charge of the Egyptological Library of Montpellier (awarded “Collections of Excellence” in 2018 by the French Ministry of Higher Education and Research), which has more than 30 000 books housed in four rooms. He is also Keeper of the Scientific Archives at the Institut d’égyptologie François Daumas (now ENiM team), including the documents of Émile Chassinat, Raymond Weill, Alexandre Piankoff and François Daumas. In the field, he is involved in the Archaeological Project at Oxyrhynchus since several years. Further informations at: http://www.montpellier-egyptologie.fr/…/jerome-gonzalez/ 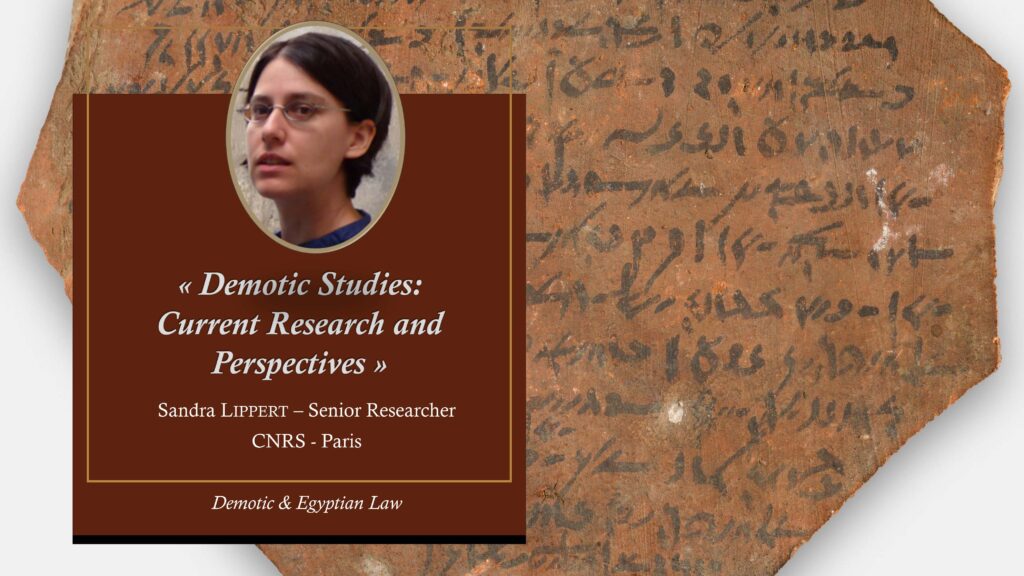 Dr. Sandra Lippert specializes in Demotic studies and the Ptolemaic and Roman periods, with interests as varied as epigraphy, history of law, geography, economy and religion. She has published many books and papers dedicated to the Fayum and is also a member of the Athribis ostraca project. After studying Egyptology in Germany, where she defended her PhD, she worked in the USA before settling in France where she now holds a position as ‘Directrice de recherche’ at the CNRS. To discover her achievements, just follow this link: http://www.archeo.ens.fr/Lippert-Sandra-Luisa.html 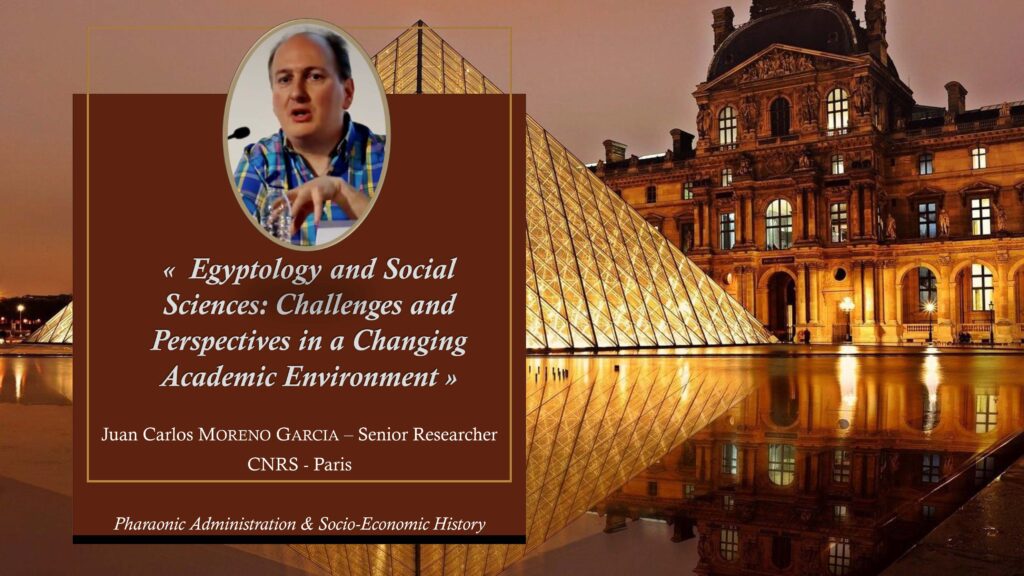 « Egyptology and Social Sciences: Challenges and Perspectives in a Changing Academic Environment »

Dr. Juan Carlos Moreno Garcia is “Directeur de recherché” at the CNRS. He is a prolific writer on many subjects, mostly relating to the economy, administration and society of Ancient Egypt. One of his last published books, written with Dr. Damien Agut-Labordère, presents a new take on the history of Egypt entitled “L’Egypte des pharaons. De Narmer à Dioclétien” (Paris, 2016). He also has a strong interest in the history of Egyptology as well as the status of the discipline in the context of the modern world, a subject which he will discuss next September in his keynote. Find out more about his career here: https://www.orient-mediterranee.com/spip.php?article1401 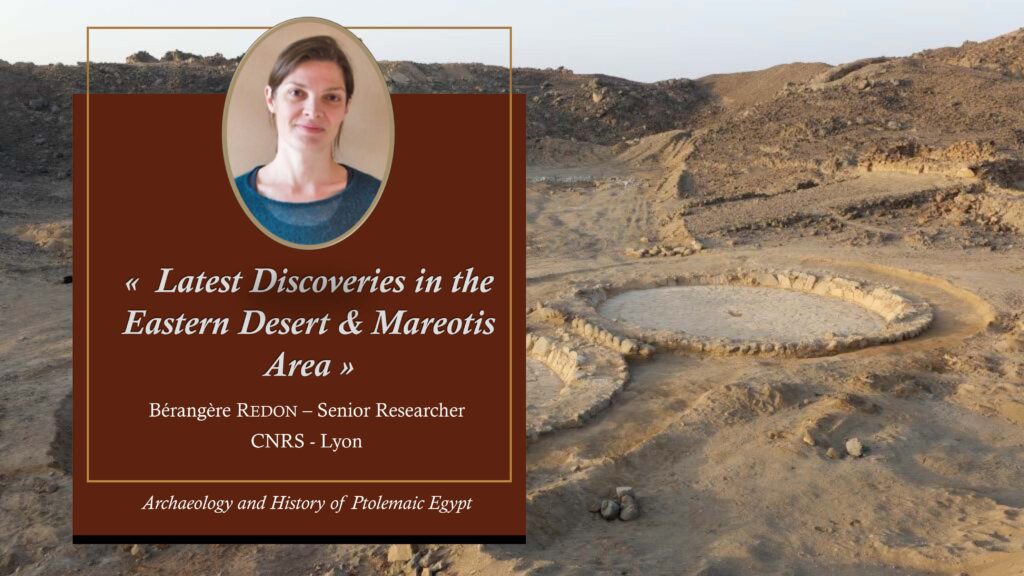 Dr. Bérangère Redon is an Historian and an Archaeologist, specialized in cultural encounters between the populations established on Egyptian soil from the Late Period to the Roman period. She is currently “Chargée de recherché” (i.e. “Junior Researcher”) at the CNRS (HiSoMA, Lyon). She focuses on the study of the Greek presence in the north-west Delta and in the Eastern Desert (Bronze Medal CNRS, 2016). Since 2018, she is director of the Taposiris and Plinthine mission (Mediterranean coast of Egypt) and deputy director of the French mission in the Eastern Desert. Since 2017, she leads the ERC project “Desert Networks: Into the Eastern Desert of Egypt from the New Kingdom to the Roman period”. Further informations at: https://www.hisoma.mom.fr/annuaire/redon-berangere

« The Labyrinthic Tomb of Padiamenope »

Dr. Isabelle Régen is an Egyptologist and a former Scientific Member at the Institut français d’archéologie orientale (2003-2007). Since 2007, she is “Ingénieure de recherché” (i.e. “Senior Research Associates”) at Paul-Valéry Montpellier 3 University. Her research interests include in particular ancient Egyptian funerary religion (lexicography, rituals and texts) and natural history. She is the co-director with Prof. Claude Traunecker of the French Epigraphical Mission in the Tomb of Petamenophis (Padiamenope, TT 33, Dyn. 25-26) where she has been working since 2004 (joint team from the IFAO, Strasbourg and Montpellier universities). Further informations at: http://www.montpellier-egyptologie.fr/equipe/isabelle-regen/ 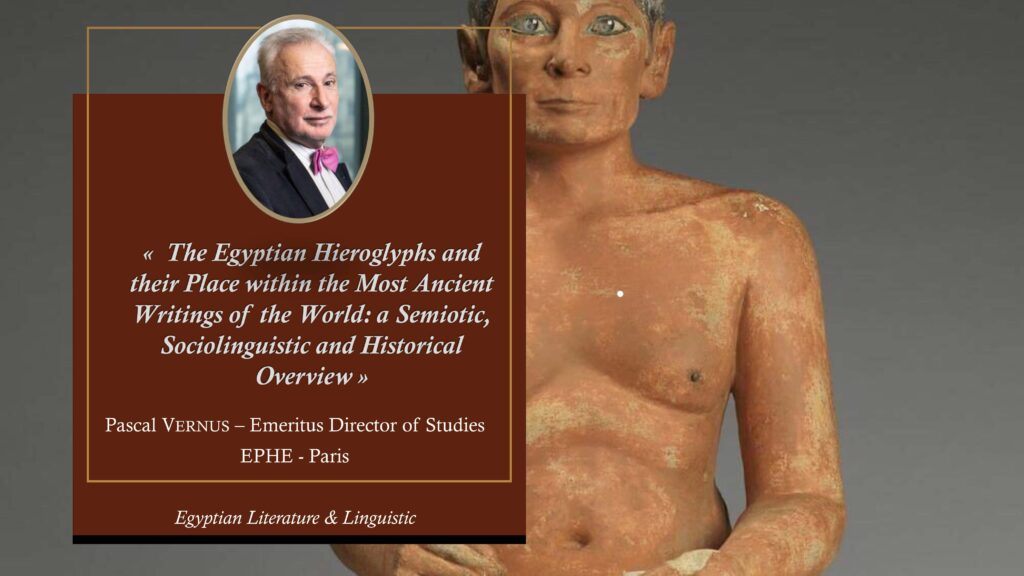 « The Egyptian Hieroglyphs and their Place within the Most Ancient Writings of the World: a Semiotic, Sociolinguistic and Historical Overview”

Dr. Prof. Pascal Vernus is Directeur d’Études Émérite at the Ecole Pratique des Hautes Etudes in Paris. Philologist and linguist, his main research interests are Ancient Egyptian literature, history of ideas, religion and fauna. He is a former Scientific member of the Institut francais d’Archéologie Orientale (IFAO) in Cairo (1973-1976), he held the chair of Egyptology at the Ecole Pratique des Hautes Etudes from 1976 to 2013, and his career is punctuate by several important scientific appointments and prizes. For more information: https://prosopo.ephe.psl.eu/pascal-vernus