Egyptology at the UAH

The Faculty of Humanities is the school responsible for the studies on History, Art History, Archaeology, and Humanities. It is located in the College of Málaga, a historical building dating to the Seventeenth century. It is in this school where the sections of Egyptology and Assyriology are located. Under the label “Orientalística en la UAH”, our NELC team is very active in providing courses, conferences, and seminars to undergraduate and postgraduate students as well as to the general public, always interested on these ancient cultures.

Egyptology and Assyriology are fields developed at UAH only in recent years, mainly by a group of students, researchers, and two assistant professors who are designing a new MA and PhD program. By now, through the traditional BA programs in Humanities and History, students can obtain introductory training in the study of ancient Egypt and the Near East. In addition, the NELC team offers further training in ancient languages (Sumerian, Akkadian, Egyptian, Hittite) as well as on archaeology, history, and literature of ancient Egypt. Regarding its Egyptological library, in 2016 –in conjunction with the hiring of Egyptologist Antonio Morales– ­the area of Ancient Studies received a donation of 1,300 Egyptological volumes from Freie Universität Berlin and its Seminar of Egyptology. The incorporation of such a significant and cooperative donation has allowed the UAH staff to continue expanding the teaching program and research projects, which mainly focus on the historical, social, and religious aspects of the Old and Middle Kingdoms.

The University of Alcalá is also the institution under whose auspices is developed the Middle Kingdom Theban Project led by Egyptologist Antonio Morales. The MKTP aims at the excavation, conservation, and epigraphic study of several Middle Kingdom tombs in the area of Deir el-Bahari and Asasif. Its work is conducted by an international and multidisciplinary team of 35 specialists and students mainly from Spain, Egypt, Germany, United Kingdom, and United States. Concerning the MKTP, we should also mention the research group CIARQ, a Spanish acronym for “Science in archaeology”, which includes not only archaeologists and Egyptologists but also researchers from many other scientific related fields (forensic studies, geology, architecture, archeobotanics, topography). The aim of CIARQ is to promote the application of new technologies in archaeology and Egyptology and to enhance the multidisciplinary approach to the study of the past. 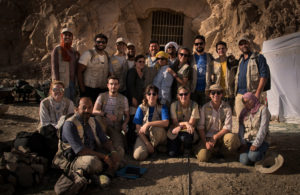