Dana Bělohoubková has received her MA in Egyptology from the Czech Institute of Egyptology, as well as MA in Classical Archaeology and Ethnology from the Institute of Classical Archaeology, both situated at the Charles University in Prague. Currently, she is a PhD candidate at the Czech Institute of Egyptology working on a research topic ‘Manifestation of the Pharaoh in the 18th and 19th Dynasties’. Since 2013, she works at the same Institute as an assistant of a librarian. Her main research interest concerns the ideology of power during the New Kingdom Egypt. Since 2015, she is a member of an archaeological expedition to Abusir, specifically working in the cemeteries dated to the Old Kingdom and the Late Period respectively. She is also a member of the Late Period epigraphic team and a main researcher of a graduate student project ‘Texts for protection of the body recorded on inner sarcophagi of the Saite-Persian era from Abusir’, financed by the Charles University. She was also a member of The Colossi of Memnon and Amenhotep III Temple Conservation Project’s team in 2016. 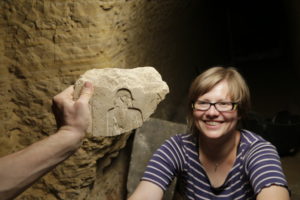 Marie Peterková Hlouchová graduated in Egyptology and History at the Faculty of Arts, Charles University in Prague. Currently, she continues with the doctoral study programme there. She focuses on the Old Kingdom religion (mainly on the sun cult) and she is also interested in wooden coffins from the 1st Millennium BC found at Abusir. Since 2015 she participates in the archaeological excavations in Egypt and in the Sudan. She is one of the executive editors of Prague Egyptological Studies.

Jiří Honzl completed his MA in Egyptology in 2016. He also studied classical archaeology and philology. Since then, he is PhD candidate of the Czech Institute of Egyptology working on dissertation project “Latin in Egypt”. He is also interested in other phenomena relating to coexistence and interactions of Egyptian and classical cultures, especially Graeco-Roman tourism in Egypt. Since 2014, he also has been a member of the Archaeological Expedition to Wad Ben Naga in the Sudan of the National Museum – Náprstek Museum of African, Asian and American Cultures in Prague where he specialises on pottery from the Meroitic period. He also took part in archaeological expedition to Abusir of the Czech Institute of Egyptology in 2016. 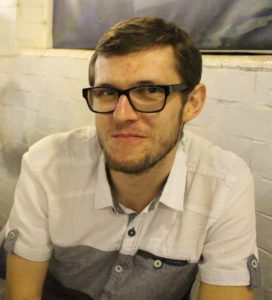 Věra Nováková graduated in Egyptology and Auxiliary Historical Sciences and Archive Studies in the Faculty of Arts, Charles University. Currently, she continues with the doctoral study in Egyptology. She specializes in ancient Egyptian society and administration concentrating on the question of patronage, complexity, etc. In her dissertation she analyses the development of Egyptian household as is reflected in the iconography of Old Kingdom elite tombs. She is also interested in ancient Egyptian material culture, with a focus on the Old Kingdom stone sarcophagi and their social context. She has archaeological experience from excavations in the Czech Republic. 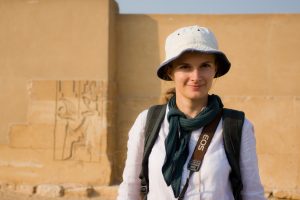