The archaeological traditions of the Jagiellonian University date back to the academic year 1863/64, when Józef Łepkowski (the future rector of the JU) delivered a series of lectures about archaeology and its place among historical disciplines.
This contributed to the establishment of a provisional Chair in archaeology in 1866 and a permanent one in 1874. These events are considered as the beginning of archaeology as an academic discipline in Poland.

Since the very foundation of the Chair in Classical Archaeology in 1897, genuine historical items have played a central role in the research and educational activities of Kraków archaeologists.
The collection of genuine ancient items from the Mediterranean region was supplemented with numerous plaster casts of the most important works of classical art. At the moment, the collection consists of about 700 authentic items and more than 100 plaster casts.

In terms of quantity, the largest group of relics come from the Greco-Roman civilization (including Greece, Italia, Cyprus, Asia Minor, North Africa, and the coast of Black Sea), ranging from the Bronze Age to late antiquity. The ancient Middle East is mainly represented by Egyptian items: a sarcophagus with a mummy, ushabti figurines, small artefacts, stone vessels, amulets, scarabs, and fragments of Coptic textiles, whereas Mesopotamian civilization is represented by a single relic, an Acadian cylinder seal.

Three different anniversaries of events important for Kraków archaeology were celebrated in 2014. Firstly, this year saw the 160th anniversary of the foundation of the Archaeological Studio, from which the current JU Institute of Archaeology developed. The second jubilee is related to the beginning of Mediterranean archaeology in Kraków: It was 100 years ago that the archaeologists from Kraków conducted their first excavations in Egypt, which marked the start of Polish archaeological research in the Mediterranean region and the Middle East. At the same time the Jagiellonian University celebrated its 650th anniversary in the very same year.

ARC  (here you can find them on Facebook)organizes and conducts excavations, as well as early phases of conservation work on various artifacts under research. It participates in publishing the results of the investigations and actively cooperates in preparing seminars, conferences and exchange programs for the international scholarly community. The Center currently conducts research on three sites: Novae in Bulgaria – headquarters of the First Italic Legion, Tanais in Russia – Greek and Roman trade settlement on the Don, and Rhisinium in Montenegro – capital city of the Illyrian queen Teuta. Also several other research project were conducted in ARC, such us “Hellenistic architecture at Tanais – the fortifications and adjoining urban territory”, “Workshops and craftsmanship in ancient Cyrenaica, based on finds from insula E XXI in Ptolemais – processing of archaeological data” or “Ethnical structures in Nubia (in the 4th cataract region) between the 3rd millenium BC and the 12th century AD”.

In ARC traditional archaeological methods are combined with modern interdisciplinary research techniques – geophysical surveying, aerial and satellite photography analyses, anthropological studies, physico-chemical analyses of wall paintings, pottery and metal – depending on need and available resources, including funding. Conservation of stone and casts of selected artifacts are also within the Center’s sphere of activity. All the archaeological data, small finds as well as architecture, is data-processed. The Center also prepares computer reconstructions of the architecture.

The Polish Centre of Mediterranean Archaeology of the University of Warsaw (PCMA; https://www.facebook.com/pcma.uw) is dedicated to the organization and coordination of archaeological research, both excavations and study projects, as well as conservation, reconstruction and restoration projects, in northeastern Africa, the Middle East and Cyprus (this currently concerns Egypt, Sudan, Cyprus, Syria, Lebanon, Jordan, Saudi Arabia, Oman and Kuwait). Projects include sites covering a broad chronological spectrum from the dawn of civilization (prehistoric times) through all the historic periods of the ancient Mediterranean civilizations to Late Antiquity and Early Islam.
PCMA manages the Research Centre in Cairo, which acts on behalf of the community of Polish archaeologists, researchers and conservators, and ensures efficient management of the Polish archaeological and conservation effort in Egypt. It represents Polish research interests in relations with the authorities responsible for antiquities in Egypt (SCA). In the other countries of its interest, the PCMA concludes its tasks in direct contact with the local antiquities organizations.
The Polish Centre of Mediterranean Archaeology has been operating as an independent research institute of the University of Warsaw under the present name since 1990.It draws on the traditions of the pioneering archaeological activities undertaken in Egypt in the 1930s by archaeologists and egyptologist Kazimierz Michałowski, founder and nestor of Polish archaeology in the Mediterranean, whose achievement was the establishment in 1959 of the University of Warsaw Research Station of Mediterranean Archaeology in Cairo.
For a list of PCMA projects in Egypt see
http://www.pcma.uw.edu.pl/en/projects/
https://www.facebook.com/pcma.uw
https://www.facebook.com/pcma.uw.cairo

Egyptology Section in the Department of Ancient Near East Studies at Faculty of Oriental Studies, University of Warsaw 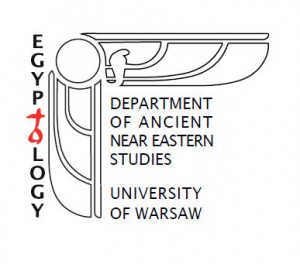 Section of Egyptology is a part of the Faculty of Oriental Studies – the Department of Ancient Near East (since 2009), soon to be again an independent department! (Yey, congrats to them!)

The beginning of the Section was the year 1934, when Antoni Śmieszek received the chair of the Egyptological Seminar founded at the Oriental Institute. In 1945 Egyptian was taught at the University by well-known archaeologist prof. Kazimierz Michałowski and in 1950 Department of Ancient Near Eastern Philology was established with the Egyptological Seminar as part of it. Between 1951-‘61 – Tadeusz Andrzejewski lectured at the Seminar – at this time he also translated to Polish ancient Egyptian literature – stories, poems. In the 1955 The Egyptological Seminar became the Department of Egyptology with independent status till 1968 when the Department of Egyptology loses its status, re-established in 1990 and then lost again in 2003.
Egyptology is a very wide term for studies which includes: linguistic, archaeology, history, architecture, anthropology, contacts with the outside world and with main focus on languages (all stages of Egyptian history) – Middle and New Egyptian, Coptic also Greek and Arabic as additional. There are two stages of studies: the BA and MA.
Lecturers are specialists in their fields, working for archaeology missions in Egypt (Saqqara, Deir el-Bahari). Also students are participants of many conferences (e.g. Symposium of Young Egyptologists, Current Research in Egyptology) and they are involved in the student organization of young Egyptologists.
The section cooperates with e.g. the Polish Center for Mediterranean Archaeology UW, Institute of Archaeology UW, Institute of Mediterranean and Oriental Cultures PAN and Pułtusk Academy of Humanities.

Scientific Association of Ancient Egypt “Kemet” of the University of Warsaw is a students’ organisation established in 2000 by a group of young researchers who wanted to extend and formalise their activities related to ancient Egypt. Since then, the association has brought together students of the university, who share mutual interests in pharaonic civilisation and are learning not only Egyptology, archaeology, or history, but also are members of other faculties, like law or geology.

The aim of the organization is twofold: developing the studies and research on ancient Egypt, and promoting the knowledge on the country of the Pharaohs. Members of “Kemet” take part in numerous popularising science events, and are involved in editing and publishing of popular, as well as scientific periodic, like “Medjat – Egyptological Studies” (in Polish). The association organises a Symposium of Young Egyptologists every year. These projects create a platform for the exchange and development of ideas among young researchers in Poland. Thanks to these and other enterprises, the organisation is able to encourage and popularise studies in ancient Egypt among students from different universities in Poland.

Many research projects had started in “Kemet”. In 2010, members of the organisation made a study trip to Egypt which resulted in a photo exhibition and popular publications. In the following year, associates performed X-rays and engaged in the research of cat mummies in the collection of the National Museum in Warsaw. The most advanced project made under the auspices of “Kemet” was the reconnaissance at several threaten archaeological sites in Egypt in 2012, which resulted in the start of the archaeological survey at Gebelein in following year. These are just of a few of numerous project done recently by the student’s organisation.